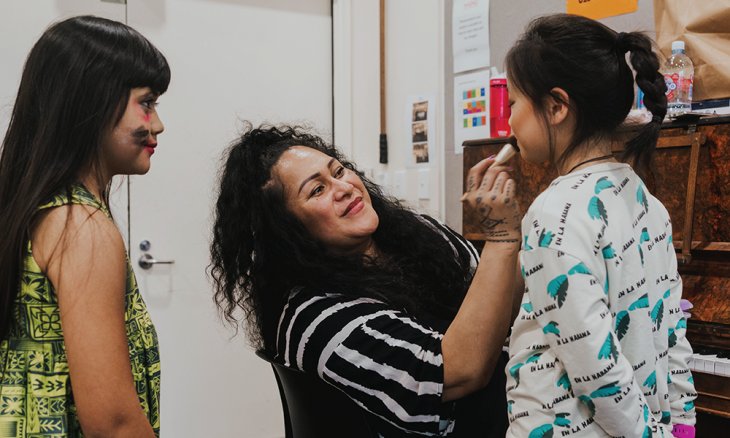 Do you dream of being a singstar? Vocal powerhouse Bella Kalolo will show you how to sing instinctively with courage and expression. Learn tools to hone your technical skills and make your performances shine.

Bella is renowned for her soulful style filled with passion and integrity. She brings that passion and soul to her teaching as she helps aspiring singers to break free of self-consciousness and sing fearlessly and truthfully.

You’ll learn about the importance of understanding and portraying the meaning of lyrics as you develop your voice’s range, volume and tone.

The programme will also cover songwriting, stage presence, how to apply make up, dance (basic movement) and mic techniques.

“Fun, exciting and a confidence booster.”

“My daughter loves singing but wasn’t confident with her voice. This programme was empowering and  creative, my daughter is much more confident now.”

This Samoan, Tongan and Maori (Ngati Porou) soul sister has worked with and supported artists as diverse as Ciara, Mos Def, Renee Geyer, Fat Freddy’s Drop, Dave Dobbyn, Hollie Smith, NZSO, J Boog, Katchafire, Don McGlashan, Common Kings, Chaka Khan and most recently with John Mayer at his Spark Arena Auckland show. She has performed at Glastonbury, City Of London Festival, Sydney Festival, Java Jazz Festival in Jakarta and numerous festivals in Aotearoa. Her acclaimed releases Without the Paper and Time and Space Ep won her Best Pacific Female artist in the Vodafone Pacific Music Awards in 2012 and 2014. After Bella’s performance at the Sydney Festival Launch in 2014, soul legend Chaka Khan invited her to perform "I'm Every Woman" at with her at a free concert at The Sydney. Bella’s movie and TV credits include:  Sione's Wedding, Matariki, The Orator, Jandals Away, Fresh TV and the web series Housiewives. Musical theatre credits include Disney's The Lion King,  Auckland Theatre Company's production of Hair,  Rocky Horror Picture Show and The Guerilla Collection with Black Grace.  Bella has also played Crystal in the musical, The Little Shop of Horrors for three separate production houses – Mark Hadlow, Auckland Theatre Company and Downstage Theatre, Wellington.